Over last six years I used bash-it framework on my MAC OS X system on my work and was really happy with the flexibility.
Only the performance was getting over the time very bad.
Sometimes I had to wait ~3 seconds for a new session or terminal window.
I have also to say, my bash-environment was overloaded with different sources, checks and autocompletions, which are triggered by .bash_profile…

END_OF_DOCUMENT_TOKEN_TO_BE_REPLACED 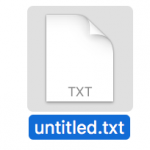 For some of my typical work flows I’m missing the base feature in MAC OS X to create a simple “New File” just like in other operating systems, like right click and “Create new Text File”.
For a quick note or just to start to create a new script/app.

One of the best tools to verify network connectivity after ping. Its a kind of combination between ping and traceroute. It shows you all host on your way (dependent on routing). Personal I find the packet loss overview very helpful especially if you have problems with your ****ing ISP.

You can get the MTR self installer for MAC OS X: here

Command syntax(please use with sudo):

To be flexible on command line, create a bash-alias for mtr:

Mac OS X has a kind of different client behavior with a SMB-Server (Samba 3.6.6-6) than a Windows client.

By saving new files, they will be stored with Mask “0600/-rw——-” and that doesn’t matter what samba configuration prescribes (force create mode = 777).

So the explanation for this problem was found in the SAMBA documentation:

SAMBA has the “unix extensions” option set to “on” by default. This allows Unix users who write to the Samba shares to set their own permissions bits.

Now set them in the SAMBA global section [1] to off:

After some time of work with my MacBook Pro a saw a strange behavior with the contextual menu “open with”.
Suddenly I had Evernote twice and fourfold and now seven times.

I tried to figure this strange behavior out and found that each copy comes after application update. For example after Opera update this contextual menu will appear one time more. So I think the behavior of a app update is like a new installation. There is a kind of check missing which should check the allready installed path. END_OF_DOCUMENT_TOKEN_TO_BE_REPLACED